Posted in Editorials By TomWhitakerPosted on August 17, 2020 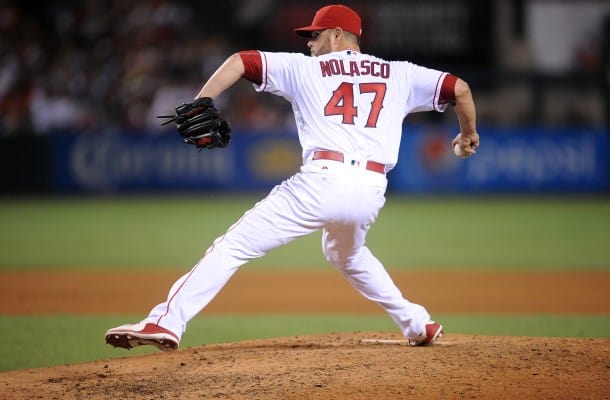 After a depressing stretch of baseball where the Angels went 1-9, they’ve won three of their last four. On top of that, although the offense has struggled before last night’s 8-5 win, the starting pitching has been fairly solid. After a thirteen-inning game, though, and a few short outings from the rotation, the bullpen has been worked hard recently. Actually, the bullpen has been worked hard all year long. On top of that, the Angels are wielding a severely shorthanded bullpen missing all three of their prospective closers. Huston Street hasn’t pitched at all this season, Andrew Bailey has only thrown three innings, and Cam Bedrosian is currently on the DL, although he’s hoping to be back next week.

Considering all of that, the Halos need Ricky Nolasco to go deep tonight to give an overworked bullpen a rest. Hats off to the bullpen holding it down through all of the innings and missing persons, but to rely on pitchers like Deolis Guerra, Mike Morin, and Brooks Pounders to throw multiple innings every game is to play with fire. They’ve all handled the workload as well as they could, but look no further than Sunday’s 6-2 loss to the Toronto Blue Jays for an example of how bad it can go when you ask too much of pitchers like that. The Angels were winning 1-0 on the back of superb spot start by Daniel Wright, who threw five scoreless innings. We won’t get into the logic behind pulling Wright after only eighty pitches, but the Halos turned to Guerra and Pounders, who combined to give up six runs over two innings and completely blow up what looked like a good day for Halos’ pitching.

After Matt Shoemaker only went five innings yesterday, the Angels are going to need Nolasco to give the bullpen a bit of a rest tonight. It’s especially important when you consider the Angels have three straight series against division rivals. Those are games the Halos have to start winning, and they’re going to need strong starting pitching and a well-rested bullpen to make some waves in those series. It’s obviously still very early in the season, but the Angels need to start beating good teams, especially those in their divisions like the Houston Astros and Texas Rangers. They’re going to need all of their pitchers at peak form, and that includes a well-rested bullpen and starters throwing quality starts. It begins tonight with Nolasco.