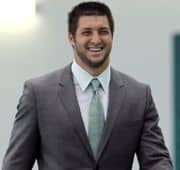 Yesterday, Halo Headquarters joked that the Angels reportedly signed Tim Tebow. Yes it was a joke, but if you want to get a laugh read the article about the “5 year Deal”. However time to get serious. Could the Angels actually be interested in the former NFL QB?

Boston Red Sox scout Tom Kotchman told WEEI beat writer Rob Bradford that the Los Angeles Angels of Anaheim wanted to draft the three-sport star out of high school. If Tebow had returned his information card to the Angels, “we were going to take him,” said Kotchman, who was scouting for the team at the time.

Was Tim Tebow a legitimate Major League Baseball prospect? He didn’t play as a senior, but Tebow hit .494 as a junior while leading Nease High School to the final four of the Florida state playoffs, earning all-state honors along the way.

“I believe he could have played in the big leagues,” said Nease coach Greg “Boo” Mullins, who called Tebow a “six-tool player” and a potential Round 7 to 12 draft pick.

The Angels wanted to draft former NFL QB Tim Tebow out of High School, should they pursue him?

“He had a strong-arm and had a lot of power,” said Red Sox Florida scout Stephen Hargett, who worked with Kotchman with the Angels. “He had leverage to his swing. He had some natural loft. He had some good power. He was a good athlete. He had enough arm for that position.

He was a left-handed hitter with strength and some size. He stood out. He was bigger and stronger than everybody. … It was just easy for him. You thought, if this guy dedicated everything to baseball like he did to football, how good could he be?”

Even though it has been years since Tim Tebow has played a live baseball game, he is currently training and invited all MLB teams to a practice.

“His swing is very simple,” Long said. “Not a whole lot of head or body movement. Chad and Tim did a nice job of simplifying and putting his swing together. It’s short and explosive.”

Should the Angels really consider Tebow?