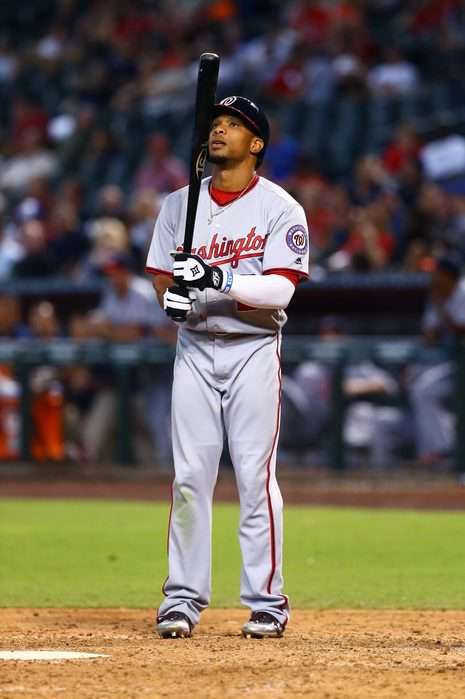 Posted in Editorials By TomWhitakerPosted on January 24, 2020

Just before Christmas, Angels fans got a little gift from Billy Eppler in the form of outfielder Ben Revere. The former Washington National and stolen base extraordinaire settled for a one year deal in Anaheim after Washington non-tendered him earlier this offseason. He hit a career-low .217 in 103 injury plagued games last season. Over his career though, Revere has been one of the game’s premier contact hitters and base stealers, hitting .303 from 2012 to 2015 with 142 steals in 174 attempts within that same span.

He has made some flashy plays in the field, including this one to rob Freddie Freeman of a home run last season, but defensive metrics actually point towards him being no more than average in the field. He has a career Rdrs/year of -3, but that has been largely due to him playing in center field for most of his career. In right field, he has a Rdrs/year of 15. There’s no doubt that Revere has the potential to regain his form and become a solid leadoff type hitter. One thing does stand in his way though: Cameron Maybin.

As great as Maybin was last season, he is still a career .259 hitter and 2016 was his first season with an average of over .270. He has also played 130+ games in only three of his ten professional seasons. With that being said, I am predicting that Maybin is moved to the bench midway through the season on order to get Revere in the starting lineup.

Maybin is a good player, but there is really no telling if he could repeat his 2016 success. It was as if Revere and Maybin switched bodies last season, as Revere usually performs better in the offensive category. Revere’s relapse last season was mostly to due to injury and bad luck.

His BABIP last season was .234, so there is a good chance he could have an average north of .300 again next season if his luck turns around. His spray chart in 2016 is completely different from his spray chart in 2015. There is a lot more color in 2015, a season where his BABIP was a modest .338. He has also sprayed the ball all over the field throughout his career. His spray charts from 2014 to 2016 are things of beauty. Maybin, however, is a real wild card, as he has really only been a productive, starter quality hitter for past two years. His BABIP last season was .383, which is way above the MLB average of about .295. In his 2016 spray charts, you can see how a lot of hits seemed to drop right in front of or near where the outfielders should have been playing or just barely stayed in down the lines.

Making Revere the starter also might benefit the team by giving them a speedy leadoff hitter. Maybin is fast, as shown by his 131 career stolen bases, but Revere is on another level of fast. Even though he was on base at just a .260 clip, he still stole 14 bases on the year. That total was the lowest of his career and the first time Revere failed to crack the 20 steal mark. Revere has cracked the 40 steal mark twice already in his career.

With no premier defensive catchers in the AL West, Revere could crack that mark against division opponents alone. Maybin stole 15 with an OBP of .383, showing that he didn’t take very many risks on the basepaths. Revere is also just two years removed from being worth nearly 11 runs on the basepaths. For comparison, Maybin’s BsR over the past three seasons is 3, with 2.5 of those runs coming last season.

While both would be significant upgrades over Yunel Escobar at leadoff, Revere brings that Ichiro-esque mix of contact and speed that the Angels desperately need in front of Mike Trout, while Maybin brings more power that is better suited for the two-slot in the lineup.

Fangraphs shows some great comparisons between Revere and Maybin. The site shows that Revere has been at or above the league averages in categories like average, BB/K, and wOBA while Maybin’s averages have their fair share of valleys and peaks. While Maybin has the advantage in isolated slugging, home runs, and every other power category, Revere has not only been better over his career, but also more consistent in every other category. If Maybin can’t live up to his 2016 numbers, we might see Ben Revere starting in left next to Trout come June.

Ben Revere, Not Cameron Maybin, Could Be the Angels’ Solution in Left Field
Scroll to top