Posted in Editorials By TomWhitakerPosted on January 17, 2020

While the Angels have not been around for as long as legendary teams like The Boston Red Sox, New York Yankees, and St. Louis Cardinals; the Angels have had the pleasure of housing some of the greatest outfields in Major League history.

The Angels have had teams with All-Stars and sluggers enshrined in Cooperstown like Reggie Jackson as well as people who will have a pretty good shot of making it to Cooperstown like Tori Hunter and Vladimir Guerrero. We will be looking at the greatest Angels outfields of all time today and this will definitely not be an easy category.

The 1982 Angels were an absolute force to deal with in the AL. You would be hard pressed to find another outfield with this much talent! An MVP, two perennial All-Stars, and a catcher turned left fielder! This outfield had it all.

This was such a young and athletic outfield! All three of these players would go on to be huge cornerstone  players with the franchise they ended up with. One thing I would like to point out is that Edmonds and Salmon both had over 100 RBI’s and they both only played about 140 games! This team is also famous for one of the biggest collapses in Major League history… but that is an article for another time. A serious contender here folks!

Holy Cow, this outfield is stacked with talent. This year was Vlad Guerrero’s first in Anaheim and it definitely was memorable. He won the first MVP for the Angels since Don Baylor. Every starter batted at least .294 with Jose Guillen and Guerrero hitting 27 and 39 respectively. And how about Jeff DaVanon who was an unsung hero as a legit 4th outfielder who would’ve started on most teams. 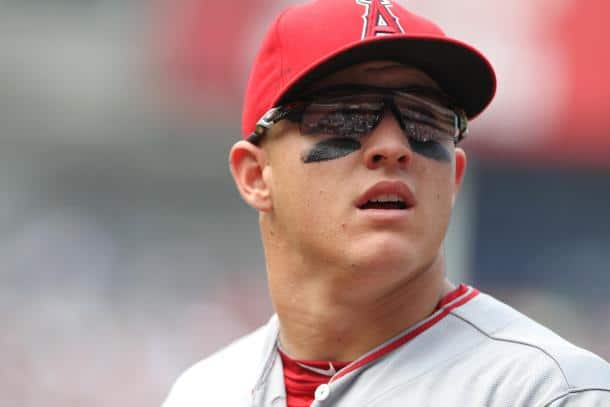 Trouts’ rookie year was the beginning of a new era for the Angels. Trout and Trumbo, The “TNT Boys” both made the All-Star team and quickly became a dynamic duo. This was a very good team that had another trademark Angels collapse just like the 1995 team. Going along with Trout and Trumbo you also have the future Hall of Famer in Torii Hunter who drank out of the fountain of youth and had one of his greatest seasons in his marvelous career.

After doing all the rigorous research my conclusion is that the 1995 California Angels had the greatest Angels outfield of all time. While you could surely make the argument that the 1982 teams’ outfield had the best careers,  this article was only looking at individual years. Tim “King Fish” Salmon swam up-stream for the entire year putting up impressive numbers! In my opinion, this was Salmon’s best year in his fourteen year career. You also had Garret Anderson and Jimmy Edmonds putting up huge numbers during this standout year! This is such a debatable topic and if you asked five different writers you would probably get four different answers on this subject! This concludes this edition of Halo Headquarters “Best of” series!

*Fun fact for the water cooler! Jim Edmonds was eventually traded for Halo Hero Adam Kennedy and Kent Bottenfield in the year 2000!

Next up we will look at the greatest 1st baseman in Halo History! Who will it be? Wally Joyner? Darin Erstad? Albert Pujols? You will have to stay tuned!

The Greatest Angels in the Outfield
Scroll to top