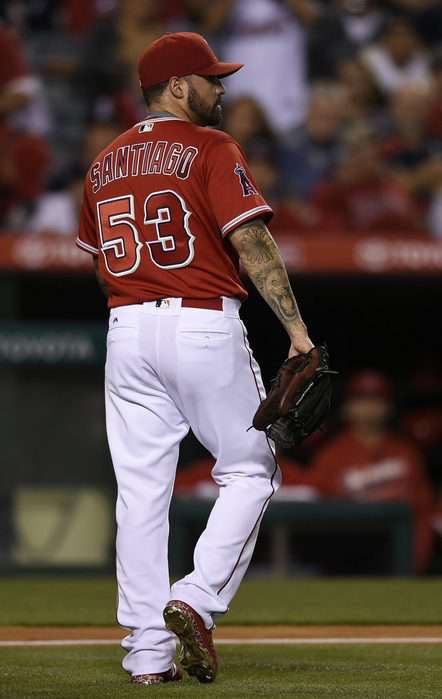 Posted in Halo News By TomWhitakerPosted on July 21, 2020

Angels starting pitcher Hector Santiago has been ejected in the 3rd Inning against the Orioles for arguing balls and strikes with home plate umpire.

It was not the best of start for Santiago as he gave up back to back home runs in the 1st Inning. Any pitcher should not be giving up home runs especially in the first inning. Hector Santiago left two fastballs right over the middle of the plate and he paid for them. Both Home-runs went to center field and were crushed. Santiago almost gave up another home run in the 2nd inning, but Mike Trout would reach over the wall and rob it.

With the 3rd Inning coming into play now, Santiago would face former Angels DH/1B Mark Trumbo, and once again would make another mistake. Trumbo would hit a Trumbomb as he gave the Orioles a 4-1 lead in the 3rd Inning. That would be Trumbo’s 13th home run of the season. After Trumbo, Santiago would have some special words for home plate umpire John Tumpane.

After 3 straight balls to Orioles Catcher Wieters, Santiago got off the mound and said “It was right over the ****ing plate,” Tumpane stood up and tossed Santiago for his actions. Santiago only lasted 3 Innings with giving up 3 Home-runs, his worst start probably as an Angel.

Hector Santiago gets ejected for saying “It was right over the ****ing plate,”
Scroll to top