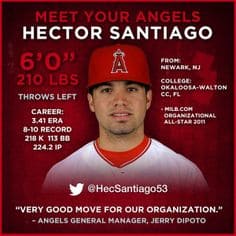 Posted in Editorials By TomWhitakerPosted on March 10, 2020

If you were living under a rock the past couple of days, you missed some news. Santiago, a left-hander, moved to the Minnesota Twins along with minor league right-hander Alan Busenitz in exchange for veteran Ricky Nolasco and former top-50 prospect Alex Meyer.

The Angels also received cash from the Twins, according to a person with knowledge of the situation who spoke anonymously because the financial terms weren’t made public.

With Santiago being a fan favorite, it was told that it was a rough trade for him as it hurt to empty his locker room. Below is Santiago’s message to the fans and organization.