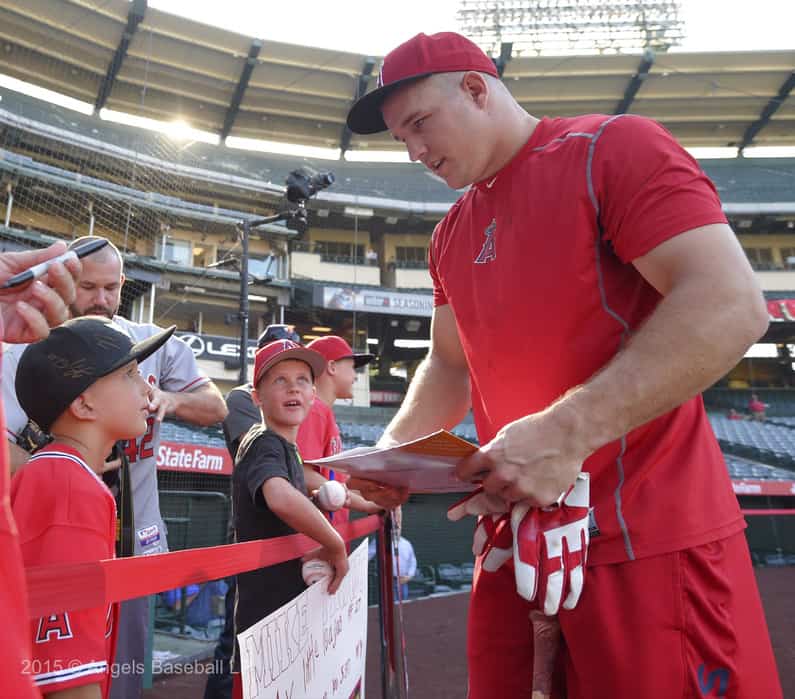 Posted in Halo Results By TomWhitakerPosted on February 25, 2020

The struggling Angels offense exploded for a five-run, six-hit first inning in which they batted around and knocked out Chicago White Sox starting pitcher Carlos Rodon after just 1/3 of an inning in a 7-0 win April 18 at U.S. Cellular Field.

The Angels produced three more runs in the first inning against the White Sox than they did in their entire previous 12-inning game against the Minnesota Twins.

Yunel Escobar led off the game with a sharp liner to right field for a base hit. Mike Trout and Albert Pujols walked to load the bases. And Kole Calhoun delivered with a hit to right field that drove in a run and an error on Jose Abreu allowed another run to score on the play. Andrelton Simmons, Geovany Soto and Johnny Giavotella followed Calhoun and all three guys provided RBI singles.

Rodon entered the game with a 12-inning scoreless streak, but couldn’t make it out of the first inning against the Angels. Rodon struggled with his command; only throwing one first-pitch strike to the nine batters he faced. He entered the game with a 1.38 ERA and after his exit in the first inning his ERA jumped to 4.73. Rodon finished with five runs, six hits, two walks and one strikeout.

In the third inning, with White Sox Jake Petricka on the mound, the Angels rallied again for another run. After both Calhoun and Simmons reached on infield singles and a sacrifice bunt by Geovany Soto, Cron singled to left field which drove in Calhoun. The Angels ended the third inning up 6-0.

Hector Santiago pitched a masterful seven-shutout innings and earned his first win of the season against his former ball club. Santiago baffled the White Sox batters and tied his career-high in strikeouts with 10. In his first two starts this season, Santiago had 10 strikeouts. He matched that total in just one game. He only allowed five baserunners on two hits and three walks. Santiago lowered his ERA from 3.95 to 2.61. The start was huge for the Angels’ bullpen because of the overuse in their previous game.

The Angels picked up another run in the eighth inning when C.J. Cron drove in Simmons to increase the lead to 7-0. Cron had a nice game finishing 3-4 with three singles and two RBIs. The one out that Cron did make was a hard line drive to center field. Cron’s batting average raised by .59 points.

The Angels displayed stellar hitting, pitching and even defense in the victory. In the top of the fifth inning, Escobar made a diving stop on a sharp groundball hit down the third base line by Austin Jackson.

The offensive success for the Angels definitely served as a confidence builder for the club. This game marked the first time in the Angels’ 2016 season that they scored more than five runs in a game. More importantly, seven of the nine Angels’ batters recorded a hit. Calhoun and Soto had two hits. Simmons finished with three hits. 13 hits are the most the Angels have recorded all season.

Another positive note for the Angels was their bullpen shut the door in the eighth and ninth innings. With a comfortable seven-run lead, Greg Mahle and Mike Morin combined for two-shutdown innings to complete the shutout victory for the Angels.

The Angels look to keep the bats rolling as they take on the White Sox again at 5:10 p.m. tomorrow. Matt Shoemaker takes the bump as he faces off against Mat Latos.

LTBU: Santiago dominates in Angels win over the White Sox
Scroll to top