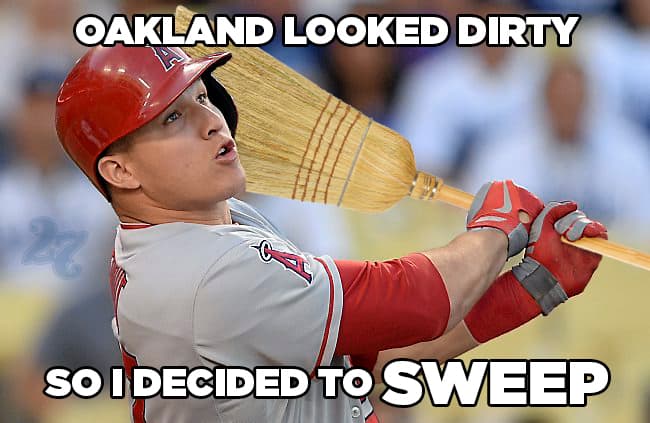 Posted in Halo Results By TomWhitakerPosted on December 29, 2019

Light that baby up as the angels acquire their first sweep of the season against the Oakland Athletics.

Matt Shoemaker, on the bump today for the Angels, had a stellar performance. Only allowing one hit through six straight shutout innings. Although, he struggled with the walks especially in the second inning, but punched his way out. Shoemaker, remained strong through his six innings of work, only to be relieved by, Greg Mahle, making his Major League debut. After a great defensive play in right by, Calhoun, the rookie breezed through the inning.

Wasn’t till the third inning, Mike trout, singled for a lead off base hit, then stole second. It took two outs to bring up, Cole Calhoun, who lined a ball to center scoring, Trout. This scoring play would repeat itself in the fifth as, Calhoun, got his second hit and second RBI of the game. As the Angels reached the top of the eighth, Cole, doubles to get his third hit of the afternoon. Simmons, followed him by lining an RBI single up the middle, extending the lead to three. The A’s answered back in their bottom half with a, Marcus Semien, solo home run off of, Fernando Salas. The Angels regrouped in the ninth and put a three spot in Oakland. No longer a save situation, Joe Smith, came into the ninth and put the Athletics to bed. Angels sweep the A’s in 5-1 victory.

The Angels, looked like a completely different team for this series. they scored a total of seventeen runs in this four game winning streak. Clutch hitting came through for the Angels this series and they will need it this season. As long as they can keep having productive at-bats the offense should stay vibrant. This game, Cole was the mvp for the day, as he produced two of those five runs and a three hit game. Good at-bats and being aggressive on the bases will work for this offense. The defense is stellar, and the pitchers of this organization will battle and keep this team in the fight. Our Angels take a day off, but watch them on friday as they take on the 0-7 Twins.

LTBU: Get Your Brooms out, Angels Sweep A’s
Scroll to top