Posted in Editorials By TomWhitakerPosted on November 21, 2019 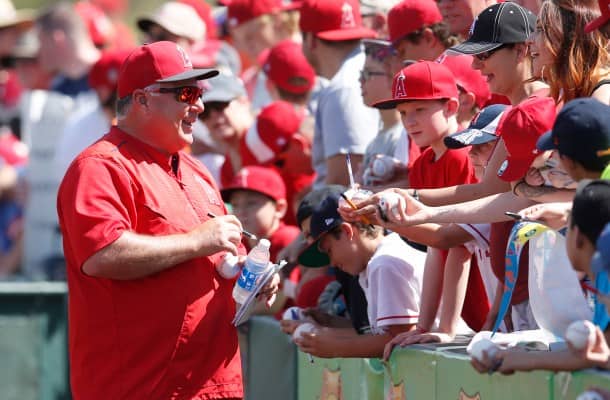 On the eve of pitchers and catchers reporting, Spring is in the air, and baseball is right around the corner! Tomorrow is the unofficial start of Spring Training, so we’ll take a moment to highlight the pitchers and catchers worth keeping an eye on. Now, you should never put too much stock in these Spring Training games; they’re meaningless games full of players who would never even sniff a major league field, but they can still tell us a lot about how healthy a player is and what kind of shape they’re in. Plus, who makes the team or not will be based on these games, regardless, so let’s see who’s worth watching!

Tyler Skaggs – Skaggs’ ability to put together a consistent, solid year over the course of a full season is also a huge key to the Angels’ hopes this season. Skaggs has potential, lots of it, but he’s never been able to put it together. He’ll have a full, healthy offseason and Spring Training to establish himself as a key member of the rotation, but he’ll need to have a solid Spring.

Alex Meyer – Meyer has the highest upside of any of the current Halos’ starters, Richards included, but also has not been able to string together any positive momentum over the course of his short career, succumbing to injury, short, ineffective major league stints, or both. Meyer flashed some positive signs in a very small sample size for the Angels at the end of last season, but if he wants to have any shot at being a part of the rotation, he’ll have to put together a very good Spring.

Cam Bedrosian – Cam has always had the potential and the pedigree – his father is Cy Young winner Steve Bedrosian – and finally made good on that potential with an amazing season last year before ending the season on the DL. He’s projected to have some serious regression, but he can allay any of those concerns and build off a great year by stringing together a good Spring performance and solidifying his spot in the bullpen.

Carlos Perez – The young catcher put together an impressive rookie season out of nowhere, raising hopes that the Angels had found a full-time catcher that could carry at least a league-average bat and impressive defense. He followed it up with a dismal offensive season, although it didn’t affect his defense as he was a Gold Glove finalist. The Angels are going to need to rely on their offense most nights if their rotation doesn’t take a huge step forward, and getting consistent offense 1-9 will be important. If Perez can bounce back and show some improvement in the batters’ box this season, it will be a huge boost to the Halos’ offense.

Taylor Ward – With only Perez and Martin Maldonado blocking Ward from the majors, it’s highly possible we could be seeing the former first-round pick sooner rather than later. If Ward can have an impressive Spring, it will go a long way. We all know how much Mike Scioscia values defense from his catchers, so Ward will need to show development in that area more than any other if he wants to crack the roster. His ability to man the position and run the staff will need to pass the test in Spring first.

The Bottom Line – The Angels will be counting on a lot of players taking huge strides forward in their development, and it all starts with what they show this Spring. If the Angels can get the improvement across the board they’re hoping, the Angels will be contenders. These were some of the most important players the Angels will be relying on to take those big steps, and a few dark horse contributors for the Halos this season. We’ll be following up shortly with the non-catcher position players to watch this Spring. Baseball is here, it’s time to get excited!

Players to Watch in Spring Training Part I: Pitchers and Catchers.
Scroll to top