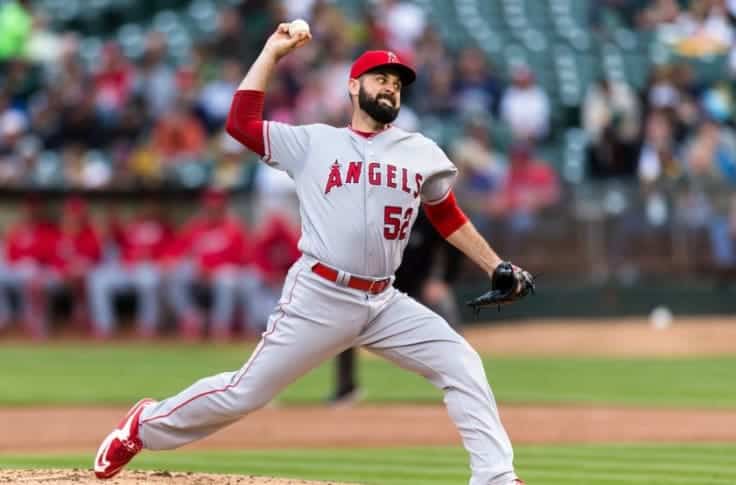 The 2016 Angels came into this season with hopes of competing for at least an American League West title.  Those hopes quickly faded after a 13-20 start and the loss of starting pitchers Garrett Richards, Andrew Heaney, CJ Wilson, and Nick Tropeano to season ending injuries.  Mid-season signings of Jhoulys Chacin and Tim Lincecum did little to bolster the ailing rotation and pitchers were even signed just to make spot starts (remember David Huff?).  As much as the rotation is up in the air for the remainder of the season, it could look even worse for next year.

In contrast, the bullpen, even with Joe Smith being traded and Huston Street losing form recently, could be gearing up to be a bright spot for the Halos next year.  After coming on strong of late, Cam Bedrosian  has now found himself as the current closer for the Angels.  While the losses of Smith and Street have helped this to happen, Bedrosian has made the most of the situation and is looking like he can be the next dominant Angels closer.  In his last 14 ⅓ innings pitched, Cam has 23 strikeouts to go along with an impressive 1.01 WHIP.  If he can continue this type of performance for the rest of the season, Cam will see himself as the closer coming into next season.  Setup man JC Ramirez (5 out of 5 in hold situations) and Fernando Salas (only allowed 3 of 20 inherited runners to score) have looked good at times but the bullpen as a whole have lacked the consistency for anyone to settle into a role.  Each bullpen pitcher must find his role to give Scioscia the confidence to put them in during late game situations.

Many things can and will happen from now until the start of next year including trades, injuries, or player call ups. This could make next year Angels pitching staff look very different than this year’s but here’s the pitchers the Angels may have in the their rotation on Opening Day 2017:

Since Skaggs has returned from Tommy John surgery, he has  looked fantastic giving up 4 earned runs in 17 ⅔ innings.  He has been able to go at least 5 innings in each start and is continuing to increase his pitch count.  Still only 25 years old, the lefty should become the ace of the staff by next year.

Richards hasn’t pitched for the Angels since May 1st when he injured his UCL.  He has put off having Tommy John surgery and instead elected to go with stem-cell therapy.  The results from the therapy have been positive enough to give hope that he may not need Tommy John surgery.  If Richards is able to completely come back from his second major injury, he and Skaggs will be a formidable 1-2 punch next year.

Since going 16-4 in his rookie season in 2014, Shoemaker has only been able to go 13-22 in his past two seasons.  But those numbers are a bit deceiving as the Angels are only scoring about 2.2 runs a game when he is on the mound this year.  At times this year, he has shown how good of a pitcher he could be.  During a span of 66 ⅔ innings, Shoemaker walked only 8 batters while giving up 19 earned runs.  Unfortunately, his 2.57 ERA during that timespan only got him 2 wins and 4 losses.  If the Angles bats can give “The Beard” a few more runs per start next year, his record of 6-11 could be flipped around and that would make him a solid number three starter.

This is where the Angels have a few options and a couple different directions they can go.  They could decide to bring back Jered Weaver if he is willing to take a hometown discount and sign a one year contract with a possible team option for a second year.  Weaver is having a decent year despite having a fastball that hovers around 82 mph and giving  up 23 home runs but he has been the face of the Angel organization since being drafted out of Long Beach State in 2006.  As long as he is able to keep the Angels in the game, Weaver could still be a viable number 4 or 5 starter or even be moved to the bullpen.

Ricky Nolasco was brought over from the Minnesota Twins in exchange for Hector Santiago at the trade deadline.  Nolasco is an inning eater who is still averaging six innings per start.  He is signed through next year and with a team option in 2018 so he’ll most likely be part of the rotation next year.

Alex Meyer also came over from the Twins in the Santiago deal and was actually the guy the Angels wanted more in the trade.  The former first round draft pick has been a top 50 prospect the past three years but was shut down this season after only 21 innings due to shoulder fatigue.  Angels GM Billy Eppler said that team doctors looked at a MRI of Meyer’s shoulder and it showed no damage.  He is scheduled to start throwing this month and if everything goes well, Meyer could be pitching for the Angels at the end of the year.  Eppler called the trade for Meyer “a calculated risk, but one that we needed to take.”  His upside could be tremendous as he will come in next year trying to earn a spot in the rotation but may even end up in the bullpen.

Nate Smith has quickly risen through the ranks in the Angels minor league system.  He is the top rated pitcher in the organization and may get a semi try-out this year in the form of a September call up.  While he is big at 6’3”, Smith fastball stays around 90-91 mph and relies more on his offspeed pitches. With the Angels pitching staff so thin at the moment, if Smith isn’t in the rotation at the beginning of the year, he should be there by mid-season.

The Angels have a few different ways they can go in terms of pitchers.  If no one in their own organization works out, they can try to pick someone out in free agency but there won’t be too many tempting names on the market in 2017. Pitchers like Edinson Volquez, RA Dickey, or Jorge de la Rosa may not ignite a lot of excitement with Angels fans but are players that the Angels could afford and plug right into the rotation.

With injury and under performance plaguing the Angels pitching staff this year, the Halos season was over much earlier than they would have hoped.  The last part of this season will be used to audition pitchers for next year before Angel executives decide how to rebuild the staff for next year.