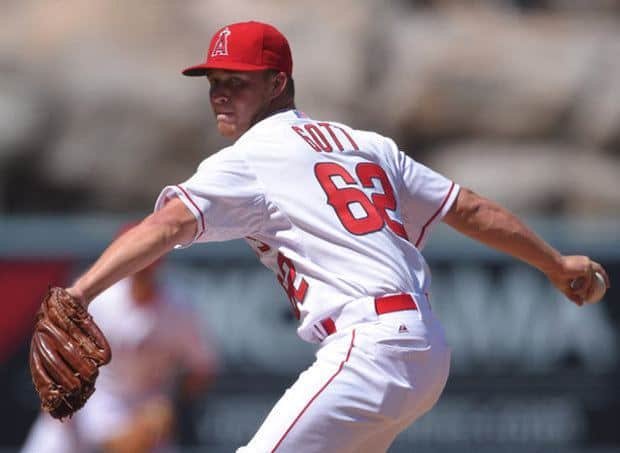 Posted in Halo News By TomWhitakerPosted on April 15, 2020

During the Angels last rise to success, from 2002 till 2009, they always had strong back end of the bullpens. They transitioned from long time closer Troy Percival to Francisco Rodriguez after him. In front of both of them was a man with a rubber arm, named Scot Shields. Shields was Mike Scioscia‘s trusted set-up man, from 02 until his retirement from baseball after the 2010 season. Aside from being the set-up man, he was very versatile and could pitch multiple innings, and fill multiple roles as he was a starter, middle reliever, set-up man, and part time closer during his career. Over his career, Shields was 46-44, with a 3.18 ERA in 491 games  pitched, spanning  ten years, all with the Angels. He logged 631 strikeouts in 697 innings in his career.

Now, the Angels have another reliever in the same mold as Scot Shields, and his name is Trevor Gott. Gott was drafted out of the University of Kentucky, in the sixth round of the 2013 MLB Draft by the San Diego Padres.  He spent a season and half in the Padres organization, but on July 19,2014 he was traded along with Huston Street to the Angels in a six player deal with the Padres last summer. At the time, he was said to be a throw in, but with a solid end of the 2014 season, he was named the Angels’ Double -A affiliate, Arkansas Travelers closer to start the 2015 season. He recorded eight saves, and struck out 20 batters in 19.2 innings pitched. He would earn a promotion to Triple A, and joined the Salt Lake Bees.  While on the Bees, he pitched eight and one-third innings, posting a 0.00 ERA, and struck out 10 batters. He was called up by the Angels on June 13, and was given number 62, former number of Scot Shields. He made his major league debut on June 14 against the Oakland Athletics, and pitched a perfect inning, including his first MLB strikeout.

Trevor Gott has transitioned into the seventh inning set-up role, and has pitched in four ballgames, allowing 3 hits, no walks, no runs, and three strikeouts in five innings of work, since his call-up. He features a upper 90’s fastball with movement that has touched 99, to go along with a plus curve-ball that nicely complements his fastball. At just 22 years old, Gott is looking to lock down the role left by Kevin Jepsen, when the Angels shipped him to Tampa Bay in exchange for Matt Joyce, in the off-season.

I believe Trevor Gott can be the next long term Angels reliever. He has shown plenty of promise in his brief stint so far, and his lively arm and poise can keep him in the big leagues for many years to come. Currently, he is a strong candidate to hold down the seventh inning job, and provide a bridge to Joe Smith and Huston Street. However, at just 22 years of age, He may just be the Angels future closer as well, as he could take over after Street departs after the 2018 season. In the interim, Gott will hope to prove, he can be the Angels’ next Scot Shields, and become a work horse bullpen arm for many years to come.

Trevor Gott Is the Angels Next Scot Shields
Scroll to top