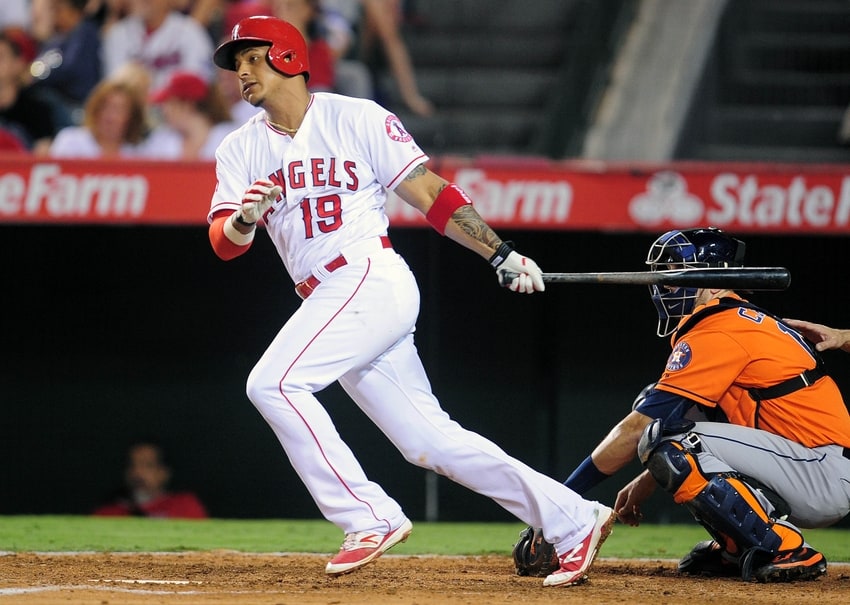 Posted in Editorials By TomWhitakerPosted on October 24, 2019

After a strong rookie season, 25-year-old Jefry Marté has proven he belongs on a big league roster. Jefry (with one F) was worth 1.2 WAR and 12 runs above replacement in just half a season of work and nearly half of his 65 hits went for extra bases, as he hit 14 doubles and 15 home runs in 258 at-bats.

The rookie had an OPS .790 and an OPS+ of 115 on the season, better than million dollar men Justin Upton and Jason Heyward and close to that of Giancarlo Stanton.  Obviously these guys had down years, but it still speaks measures to Marté’s talent, who was just considered AAA depth at the start of the season.

Marté, a natural third baseman, saw himself mostly in left field with Angels last season due to the success of Yunel Escobar. Escobar, who cost the Angels 12 runs on defense and had a -0.8 dWAR, is almost guaranteed to have his $7 million option picked up.

So where does this leave Marté? He was not great in his first action as a left fielder, as shown by his Rdrs/year of -15, yet he will not get a chance at playing third base regularly, as Escobar has refused to learn a new position. Even his move to third came with reluctance, as he didn’t want to move over from shortstop in Washington. Marté can’t move to first, a position he played extensively in the minors, as C.J. Cron and Albert Pujols will lock down that position for the next few years. Marté is a big bat to have in a lineup, but as of right now, he has nowhere to play.

One option for Jefry is to move to second base while Esky mans third. This would solve two key problems for the Angels in 2017. Cliff Pennington is nothing more than a late-inning defensive replacement and there is not much organizational depth at the position, so the move would solve the second base situation. It would also give Marté a lot more chances at the plate.

The only issue is Marté has never played an inning at second, but then again, that didn’t stop the Angels from trying him in left. Marté has seen success in the infield throughout his career, so he may not be bad defensively. He has played every infield position except second. If Kaleb Cowart can play second, then Marté probably can as well.

It would also give the Angels more money to spend on left field. They won’t have to spend on second, so it would open the door for Billy Eppler to sign Yoenis Céspedes if he opts out of his Mets contract. That would bring an even bigger bat to compliment Trout, Pujols, and Calhoun. It will be a hard pill to swallow, as we would have to watch Yunel at third for one more season.

Another option the Angels might consider is trading either Marté or Escobar, with the latter be the most likely. Marté is till under club control until 2022, so trading him would be difficult for the team and frankly wouldn’t make much sense. Escobar, however, can be used as trade bait if the Angels value defense and power over batting average.

With two straight seasons of having an average above .300, Escobar could net the Angels a nice bullpen arm much better than Trevor Gott or some decent young talent plus $7 million in cap space. The Halos could easily replace Escobar in the leadoff spot by signing a guy like Jon Jay or the on-base machine Dexter Fowler, given he opts out of his contract with the Cubs for a bigger salary. Jay will be the cheaper option and may be the better option as he is similar to Esky, as his OBP doesn’t pop out, but he has hit for a high average throughout his career.

Jay could fill the left field void nicely for a year or two and save the Angels some money for the free agent classes to come, which include guys like Lorenzo Cain, J.D. Martinez, and Carlos Gonzalez next offseason and Bryce Harper, Andrew McCutchen, and the underrated A.J. Pollock in 2018. It would also clear cap space to help fill second. The Angels could make a legitimate run at top second base option Neil Walker who, like Jay and Fowler, has hit consistently and can get on base. It wouldn’t bring a power bat to the lineup this year, but it would give the Halos a few quality ones that can create run scoring opportunities.

So what should the Angels do this winter? Should they give up some defense and throw Marté at second and use the $40 million in cap space they have to sign a marquee name? Or should they value defense more, trade Yunel Escobar, give Jefry a chance at third, and sign some quality free agents? The first option would give us a proven lead off man, but might turn into another Josh Hamilton situation if Céspedes doesn’t play well.

The second would involve chance, as their would be no clear-cut option to bat in the leadoff spot and Jay or Fowler may not even end up with the Halos, but, if we are looking at not just 2017, option number two is the better option. It would give the Angels a third baseman who has a good chance to become a quality big league player plus it would give the Angels a better chance at nabbing Neil Walker to fill in at second and a quality option in left in Jay, Fowler, or even Ian Desmond.

The Ecobar trade could bring in some bullpen help to compliment Cam Bedrosian. Also, we wouldn’t have to watch Escobar airmail a routine throw to first next season. If the Angels want to be successful not just in 2017, but for years to come, the Marté Parté might just be getting started.

What Should the Angels do with Jefry Marte?
Scroll to top