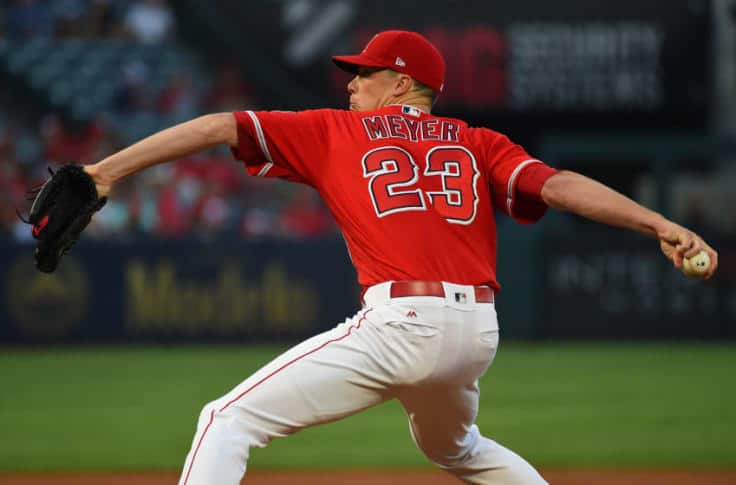 Posted in Editorials By TomWhitakerPosted on June 25, 2020

Due to the options that are already in the fold, it may be getting less and less likely that prospect Alex Meyer will be in the Angels’ starting rotation. It does not seem all too fair, however, to assume he is automatically going to be pitching in the minors once Spring Training subsides.

Meyer recently commented that he is trying to not think about the fluctuating rumors being spread. On the contrary, Jeff Fletcher of The Orange County Register signals that he is simply doing all he can while he has the chance.

“‘Everybody in this situation thinks about that, but right now, that’s the last thing in my mind,’ Meyer said. ‘I’m just taking the opportunity I have right now and doing what I can with it.’”

The right-hander will get to continue to make the most of this opportunity today when he faces the Texas Rangers. The fact that he is being used as a replacement starter indicates that Manager Mike Scioscia may have faith in his abilities still.

Meyer has admittedly been shaky this spring. For example, on March 6, he could not even get through an inning prior to being removed from the action. A tad less than a week later the exact opposite transpired. He looked like the promising prospect everyone had been raving about. He pitched a pair of scoreless frames and did not allow a single freebie. The pitcher noted the difference in terms of his mindset.

“‘Just staying more positive and having more confidence out there and simplifying it,’ he said. It makes a world of difference.’”

As long as Meyer continues to follow up on these points, it will make those last minutes choices tougher for Scioscia. Certainly, Meyer has good stuff in the tank. Good stuff is an understatement. It is a matter of whether he utilizes it to his advantage and does not overthink it when he is out there on the hill.